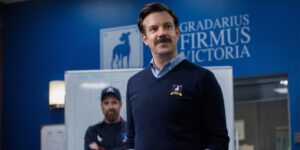 Demon have concluded a license for the Yardbirds – Over Under Sideways Down – to be used in the new Last night, Apple announced its latest original series heading to Apple TV+: ‘Ted Lasso’ starring Jason Sudeikis. The comedy is based on the character of the same name from the viral NBC Sports ads. The show will air on August 14.
The character Ted Lasso is a college football coach from Kansas. He is hired to coach an English football team, naturally having no experience of soccer.show Ted Lasso.