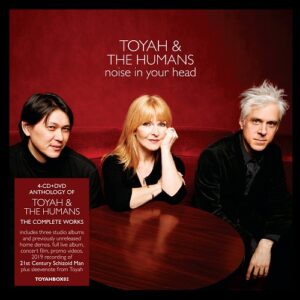 Noise in Your Head is a new five-disc box set that brings together Toyah Willcox‘s three albums as ‘The Humans’ and presents them to a wider audience with a raft of bonus material.

Formed in 2007, The Humans were Toyah, her musical director Chris Wong and multi-instrumentalist, the late Bill Rieflin (drummer for King Crimson and latter-day REM and many others). After a live performance in Estonia in 2007 (for the birthday celebrations of Toomas Hendrik Ilves, president of Estonia), the debut album, We Are The Humans, was recorded in Seattle in 2008 and released the following year. The CD version of this album in the box set now includes four bonus tracks: a cover of ‘These Boots Are Made For Walkin’’ featuring Robert Fripp, and three of Toyah’s original home demos, demonstrating her original concept for the ensemble