Hulu’s new mini series about the rise of Mike Tyson features a track from the Holland Dozier Holland catalogue – 8th Day’s “She’s Not Just Another Woman”.  She’ Not Just Another Woman” was written by Ronald Dunbar and Clyde Wilson (the names, by the way, were only pseudonyms devised by Holland-Dozier-Holland) and released on Invictus label. The single climbed to its peak position at #11 on the Hot 100 and #3 on the R&B singles chart in 1971. The single sold over a million copies and was awarded with a “gold” certification.  It was featured on their 1971 album 8th Day, and was sampled by DJ Quik and Biz Markie.  8th Day were actually put up together by the Motown songwriting team of as Holland-Dozier-Holland or HDH. T After the success of another single “You’ve Got to Crawl (Before You Walk),” the songwriting trio and as a result of the success brought by two 8th Day singles, Holland-Dozier-Holland decided to assemble a real, existing group under the same name. The 8th Day’s original lineup consisted of singer Melvin Davis, bassist Antonio “Tony” Newton, organist/keyboardist Lyman Woodard, guitarist Larry Hutchison, and another member Ron Bykowski as well as three female vocalists. Follow up singles, such as “Eeny-Meen-Miny-Mo (There’s a Crowd)” and “If I Could See the Light,” never really got to surpass or even just equal the first two hits, and the band eventually split. Listen to the album here https://www.tracklicensing.com/artist/8th-day/ 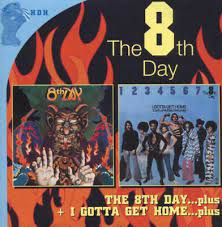