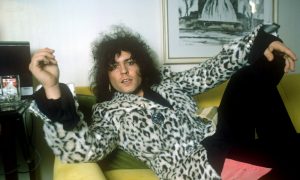 T. Rex were inducted into the Rock & Roll Hall of Fame during tonight’s ceremony, which aired on HBO. Ringo Starr inducted the band, honoring the late Marc Bolan in his speech. “People knew him as a great musician, a songwriter, a guitarist, but he was also a poet, and he was very proud of that,” Starr said. “In fact, his poetry was as important to him as his music. He had great style and was really unlike anyone else I have ever met.” Following Ringo Starr’s speech, there was a video featuring remarks from Billy Idol and Joan Jett, as well as archival footage of Tony Visconti, Elton John, David Bowie, and John Lydon. “There’s an amazing sexuality to Marc,” Joan Jett said. “I had a major crush on him.”Marc Bolan’s son Rolan Bolan accepted the Rock Hall’s induction on his father and the band’s behalf. “I really think my dad was put on this Earth not only to play music, but to show off his unique magnetism and charisma,” Bolan said