Demon Music are releasing a new Suede compilation called Beautiful Ones: The Best of Suede 1992-2018 which will be available as a 4CD, 6LP vinyl and 2LPs packages. Limited signed editions are available.

The original era (1993 to 2002) saw the band issue five albums including their Mercury music prize-winning self-titled debut (1993), the even better follow-up Dog Man Star (1994) and then after the departure of guitarist and songwriter Bernard Butler, three further albums including the hit-packed Coming Up (1996). The 2003 collection Singles summarised this period and included a couple of non album tracks, including the single ‘Attitude’. This new Beautiful Ones compilation has been compiled by the band, and features hits (‘Animal Nitrate’, ‘Stay Together’, ‘Trash’) , favourite B-sides (‘To The Birds’, ‘My Insatiable One’, ‘Killing Of A Flashboy’) and classic album tracks (‘The Asphalt World’, ‘He’s Gone’). It obviously brings things up to date by including tracks from the last three records, including ‘Life is Golden’, ‘ It Starts AndEnds With You’ and ‘Outsiders’. 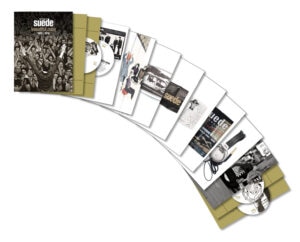